Who is that hiding in the rubble of Clachtoll broch?

Posted by Mandy Haggith on Jul 25, 2017 in Excavation, Public archaeology | No Comments 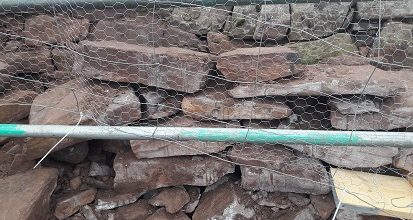 As the stones come out from inside the broch, gradually the inner wall is revealed. Some other secrets are being uncovered as well.

The wall is increasingly impressive, with its cleverly built voids to reduce the pressure on the lintels over chambers below. But leaning up against the southern side is some shambolic-looking stonework. This consists of a few courses of walling, a few other stones and a flat slab, on which some charcoal has been found. What might it have been?

One possibility is that it was a makeshift shelter built from the rubble. The slab may have been a hearth. Whoever built it had none of the mighty skill of the broch builders. It could be very recent, as there are anecdotes from the not too distant past of people being able to climb up onto the broch and into a covered chamber of some sort. Or it could be a sign of pictish-period use of the ruin, from not long after the broch was in use. The charcoal may give us some more clues as to the date of its occupation.

The ramshackle wall will be taken down, however, as there is substantial risk that it could otherwise fall down, and its removal may in fact provide some additional clues. It is positioned above the scarcement ledge, which is the layer of stone jutting inwards in a circle around the broch, which would have been the base of the first floor. The flooring was made of hazel, which we know because in a previous excavation charcoal was found on the ledge, dating from 150BC- 50AD.

Over recent days, as more and more of this scarcement ledge has been revealed, the archaeological team has found more charcoal, right the way around the ledge, which indicates that there was probably a massive fire around when the broch catastrophically collapsed, with the whole building up in flames. Whether this was the cause of the collapse, or part of its aftermath, has yet to be revealed.

However, if underneath our temporary resident’s shelter there is charcoal on the scarcement ledge, the archaeologists believe that this little construction would probably have been put up soon after the collapse. If not, probably considerable time elapsed before it was built. We shall wait and see. For now, we have a shadowy person, not much of a mason, cowering by their fire in their rude little shelter, sometime in the past two millennia. There’s a good chance they knew far less about the broch builders than we do already, despite being far closer to them in time and literally living in its rubble.

Meanwhile, more stones are being turned. Under any one of them a secret may be hiding. Under each of them is a little more mystery.

Below are some shots of the broch taken from a drone – a gannet’s eye view! 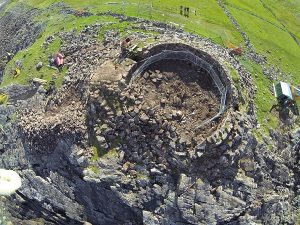 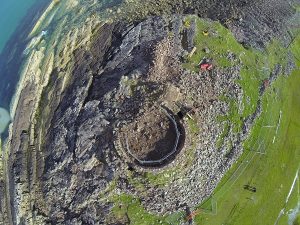 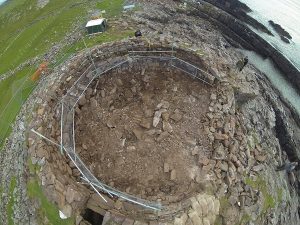