Highlights of a month of excavation

Posted by Mandy Haggith on Aug 10, 2017 in Uncategorized | No Comments 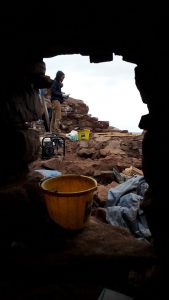 Today the archaeological team has been working at the broch for exactly a month, so I asked them what the highlights have been for them so far. While Nick said that just working on the broch at all is ‘epic’, Vanessa and I both felt that it’s been particularly exciting to watch the gradual exposure of the corbelled cell between the two walls in the east side.

Now the doorway has been completely cleared (see picture on the left for the view out of this cell) and some serious conservation work has been happening on the walls around it.

The lintel above the doorway is broken, and many of the stones, particularly on the left side of the doorway, are cracked and smashed as a result of the collapse of the upper walls. To prevent further collapse there is currently a prop holding up one particularly precarious stone. 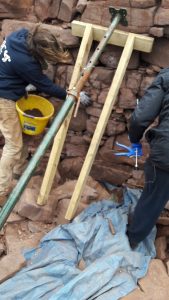 Brian Wilson is a local mason with years of experience of working on traditional buildings. He is on site, doing repairs and constructing or reconstructing walling to keep the remains stable. He has built in some stonework into what would have been a void over the lintel over the chamber. His work is recessed by a few centimetres so that it is clear that this is not the original broch-builder’s work. It is fascinating to see the care that the archaeological team take to make sure that their interventions are recognisable in the future. 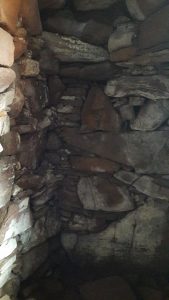 At the moment, the chamber is closed off for safety while  repairs are carried out. Inside it is a space at least 3 metres high, with some beautiful stonework. The ceiling is corbelled and the walls include large slabs with layers of horizontal flat stones beside them.

In the picture on the right, doesn’t the triangular stone seem to echo the big triangular stone above the broch’s entranceway? John Barber is wondering whether this patterning, so different from most of the broch construction, suggests that perhaps it was not original. If so, who might have built it into the gap between the walls, and why? Could a cell have been there all along, but its interior walling reworked at the same time as some other remodelling was done (including a repair to the entranceway)?

Getting the entrance into the broch open again has been a highlight for Alan, and you can hear what Gordon has to say about this here.

For both  John and Alex, the highlight has been the flight of stairs that have been exposed between the walls on the southwest side of the broch. So far nine steps have been uncovered, and we can expect more to be revealed. The average for brochs is apparently 17 steps!

This staircase climbs up from the level of the floor of the broch up to the level of the scarcement ledge, on which the first floor (or mezzanine) would have rested. The doorway to the staircase is badly damaged and the inner wall is bulging and needs to be reconstructed, and then further rubble can be taken out to reveal the bottom half of the staircase.

Now the steps are revealed, it’s much easier to imagine crossing the broch floor from the entrance and turning right up the stairs. The top step would lead onto a landing or gallery running around the west side of the building, with an opening into the first floor area then along to a second flight of stairs up to the next floor.

One of the most exciting finds so far is of some charred rush matting (thanks to Roland/NOSAS for this picture). This may have been part of the flooring from the mezzanine level. A lot of charcoal is now showing up in a layer under the rubble, including chunks from posts, grains and other fascinating hints that will, in time, no doubt generate more highlights of the story of the broch. Watch this space!