Posted by Mandy Haggith on Aug 25, 2017 in Uncategorized | No Comments

What’s the point of archaeology? Is it unravelling the mysteries of ancient trigonometric knowledge, such as on those marked in cuneiform on the clay tablets that have perplexed us for decades since they were first found? Or is it understanding what form a building would have taken, before it tumbled into a ruin of rubble? 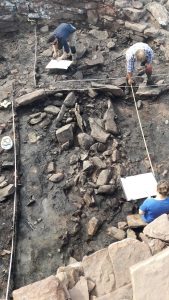 For many people the main point is found in the material objects that are unearthed. These ‘finds’, as the archaeologists call them, can tell us much about the lives of the people who inhabited the place.

Now that so many hundreds of tonnes of rubble have been removed from the interior of Clachtoll broch, finds are starting to appear at a steadily increasing rate. They are being meticulously mapped and stored for analysis, but even without carbon dating or study under the microscope to reveal such details as species and history, they are starting to tell a story.

To the south-east of the main doorway, what stands out now is the knocking stone for de-husking grain before it is ground. It is shaped like an upturned witch’s hat, and seems to be set into a clay floor. Most of the finds that have been revealed so far are in a layer of charcoal, which it is tempting to assume is the remains of flooring (and possibly roof?) that burned in the fire that was involved in the catastrophic collapse of the building somewhere between 150BC and 50AD (dated from the charcoal we found on the scarcement ledge back in 2011). 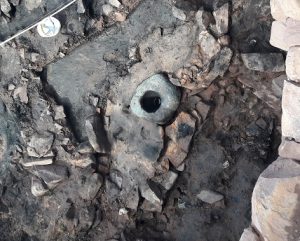 The knocking stone, built into clay

As well as considerable quantities of matting or sacking, so far there are grains, pieces of animal bones and deer antler, plenty of shards of pottery and some fragments of iron, some of which may be socketed, as if from tools with wooden handles. There are whorls (stones with holes in them) which could be weights for spindles, looms or, given the location right on the coast, fishing nets. A big stone may also have been used as a weight for fishing and certainly had rope wearing it away. Last, but by no means least, so far seven lamps (or parts thereof) have turned up. It was dark in there, of course, with no windows. Can we presume that all these objects were upstairs when disaster struck?

Imagine yourself lighting one of the lamps, and taking it up the staircase, along the gallery and into the first floor. It’s winter, the barley crop was brought in, threshed and dried, and is now stored in woven sacks. Downstairs, your mother is thumping away at the knocking stone, getting ready to bake, and you’re dreading the call to the quern stone, to grind the results of her labours. You’ve had some success hunting deer this year, and smoked some of the carcases for when times are harder. Of course, you always gather any antlers and store them for tools. Your uncle has taken over one corner for his fishing nets while his boat is out of action, saying he’s going to get round to mending them when he has a spare hour. There’s a pool of light around another lamp. Your auntie has her loom set up and spends much of her time up there weaving, trying to avoid your cousin and another of those crockery-smashing arguments that happen whenever she is in one of her moods. There was a whale washed up on the shore at Raffin a few years back and you have a whole stockpile of bone that you scavenged. Your other cousin has just told you he’ll show you how to make a hoe with a bit, which is why you’re up there. You’re just making your way down the stairs with a big chunk of whalebone when there’s a shout of ‘fire!’ You drop the bone, make sure that your aunt is coming, and flee. Your mum has abandoned the de-husking (the knocking stone is chock-full of grains) and is trying to persuade your old granddad to put down his knitting and get out of the building. With any luck, you’ll all get out alive, but the smoke is choking, and your uncle is blocking the doorway, trying to get his beloved pig to safety.

Will you escape alive?

Tune in next week for another episode of pure speculation, or come along to Stoer Hall on Wednesday 30 August at 7.30pm, to find out what the archaeological team believe they’re finding.