Posted by AOC on Mar 16, 2018 in Artefacts, Excavation, Public archaeology | No Comments 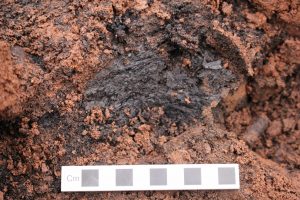 Carbonised material preserved within the layer of burning 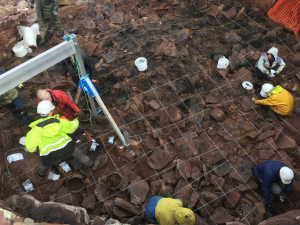 Sampling the burnt material was a fiddly task!

The occupation surfaces and hearth sequence described in our earlier posts were sealed by an event that seems likely to mark the end of significant occupation within the broch: a thick layer of charred debris covered nearly all of the interior. This debris contained a range of materials including large roundwoods, burnt heather and grasses and cereal grains. This deposit varied in thickness across the interior, but was almost continuous, overlying all of the in situ archaeological deposits and structures. In an attempt to recover spatial patterning in this deposit, we undertook a process of sampling across a 50cm grid, recovering approximately 0.5 litres from each grid square.

The fire appears to have destroyed much of the internal organic furnishing of the broch, though whether the charcoal deposit primarily relates to burnt flooring or the collapsed remains of the upper floors or even the roof of the structure could not be determined during excavation. On exposure of the scarcement ledge, patches of charcoal, apparently burnt in situ, were recovered. This deposit contained burnt small roundwoods similar to that submitted for radiocarbon dating after the 2011 works on the entrance, which provided a date of somewhere between the mid second century BC to the mid first century AD; it seems probable that these other patches and the remainder of the charcoal deposit relate to the same period.

It was notable during excavation that a large proportion of the artefacts recovered were found in the SW quadrant, in the lowest areas of the site, as though objects that had been lying on raised floors or platforms had slid downwards as the raised floors collapsed. It is possible that this occurred during the burning of the broch interior.

The fire represented by the burnt material and its constituent contexts must have occurred close to or at the end of occupation of the broch, since no disturbance of this layer or any other evidence of occupation after this event was apparent. Over the top of the charcoal layer was a layer of brown-pink sand, probably consisting of a combination of wind-blown sands, natural soil development and material eroded from the still-standing broch walls. The presence of this deposit, overlying the destruction layer suggests that the broch stood for a period as an unroofed ruin before any major collapse took place.

Next week’s post will look at the intra-mural features: cells, galleries and stairs. Sign up to receive these posts by email (box in right sidebar) to make sure you don’t miss it!