Posted by AOC on Mar 30, 2018 in Artefacts, Excavation, Public archaeology | No Comments

“So, what have you found?” is surely the question most frequently asked by visitors to archaeological excavations. Artefacts help us piece together the story of those who came before, giving us little glimpses of past lives. 224 individual small finds were logged during excavations at Clachtoll, many of which comprised groups or clusters of ceramic sherds and bone fragments. Assessment of the artefact assemblage for conservation and analysis is currently underway, and we will share more information here when we can. In the meantime, what follows represents only a brief overview.

The majority of the assemblage is the stuff of daily life: ceramics, stone lamps and cups and bone implements. Textile production is represented in the form of around 50 spindle whorls and several bone pin/needle fragments. Items of personal ornament are represented by copper alloy and iron ring-headed pins (watch the moment of discovery below), while more prosaic tools and agricultural implements were recovered in the form of a probable axe head, several blades and at least two probable iron reaping hooks. Fragments of at least nine querns were recovered. Slag was recovered, suggesting metalworking was undertaken on or near the site, and a large piece of iron bloom may be the product of smelting.

Careful excavation of a ring-headed pin at #Clachtoll 😀 Classic Iron Age type. We were pretty delighted with this! @coigachassynt #pubarch pic.twitter.com/qOVP9g40p7

Artefact distribution was notably concentrated in the south-west and south-east quadrants, and to a lesser extent in the south-west (see previous post for plan of the broch). In general, this probably reflects the main living space and activity areas surrounding the central hearth; the north-west quadrant is largely filled by the floor space surrounding the floor-set mortar and the end of the deep passage structure detailed here . However, the concentration of objects in the south-west  quadrant may indicate that a raised timber floor or gallery was located in this quadrant, and that the concentration of artefacts in this area reflects the collapse of flooring above, perhaps during the final destructive fire. 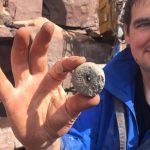 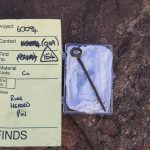 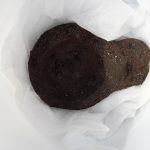 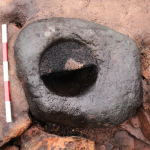 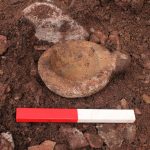 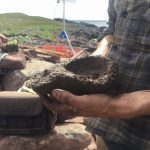 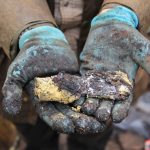 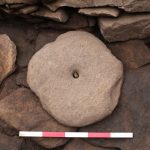 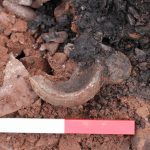 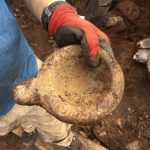 A high concentration of ceramic sherds was recovered from the south and south-east areas of the broch, and this seems unlikely to be coincidental. It is possible that a storage area was located either in this area or an upper floor directly above. Similarly, the majority of metallic objects come from this south-east quadrant and mainly comprise possible tools or blades again, suggesting that this area may have contained a storage area for tools. In contrast, the demonstrably ‘personal’ objects, including the combs and pins, came from the western half of the broch, suggesting that this may have been an area more routinely occupied as living space. The north-east quadrant of the interior was lacking in comparable finds, with the knocking stone and high concentrations of carbonised grain recovered suggesting that this may have been a cereal processing area, perhaps even contained within a separate room.

Finds were also notably absent from the excavated cells, suggesting that they were not occupied as living or activity space to any significant degree. The presence of a cache of carbonised grain and the organic, mould-like deposits encountered in Cell 2 might support the interpretation of this space as a food storage area, but further interpretations must await post-excavation analysis.

We’re as excited about the finds of the post-excavation process as (we hope) you are, so we’ll share results here as soon as we can!