Under scrutiny: a rotary quern

Another peek behind the scenes at the post-excavation process and what it is revealing. This an upper rotary quern stone (below) made of a quartzite-rich sandstone was discovered during excavations at the broch in 2017. Fragments of at least nine quern stones were discovered during last year’s work. They were used for grinding grain: rotary querns like this one comprised upper and lower stones, the upper one being rotated to grind the grain. The other main type are saddle querns, in which a hand-held rubbing stone was used to grind the grain, eventually creating a smooth, concave surface. 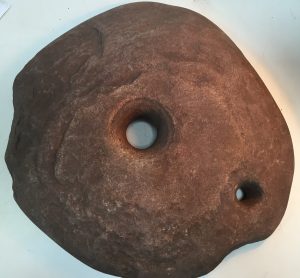 Upper rotary quern stone with central feeder pipe, and handle socket to one side

This example has a vertical handle socket hole to one side and a central perforation (typically called the feeder pipe) though which the grain would have been poured whilst in use.  AOC’s finds specialist noticed that the feeder pipe has a series of fine but clear parallel scratch marks on one side of the interior, which may be tool marks from the metal implement used to bore the hole. You can see in the photo where the scratches have softened and been smoothed away as the result of subsequent use. 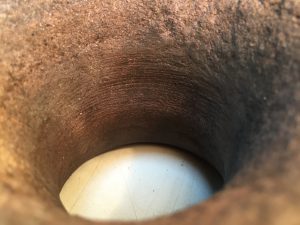 Little observations like these help us create a clearer picture of life in the Iron Age, bringing us closer to the people of Clachtoll Broch.