Scratching the surface: residue analysis on ceramic and steatite vessels

Posted by AOC on Dec 20, 2019 in Excavation, Public archaeology | No Comments

As part of the post-excavation analyses on the material retrieved during our excavations at Clachtoll, we arranged for analysis of a selection of potsherds and steatite vessels to determine whether absorbed organic residues were present. This can identify residues from food production, for example, helping us to gain a clearer picture of what people were cooking and eating in the past. 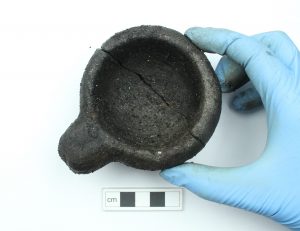 One of the steatite vessels selected for analysis

Additionally, the analysis indicated that leafy plants were included in the foods processed in these vessels. It is interesting that, although all vessels were predominantly used to process dairy products, the majority were multi-use, also being used to process marine and plant resources, whether at the same time or on separate occasions.

The steatite vessels are of a finds type traditionally known as lamps, since it has long believed that they were used for this function. Some are bowl-like in appearance while others have a sort of ledge protruding to one side, on which a wick could rest. The results of this programme of analysis have contributed to a growing feeling that not all of these vessels were used as lamps since analysis here has showed that at least two of the steatite vessels were used for processing dairy products. While beeswax – a possible source of fuel for a lamp – was identified on one of the steatite vessels, it was found to be mixed with dairy products. We can only speculate on the reasons for this – but it is not impossible that beeswax was used as a preservative, with a layer spread over the top of a perishable substance below (butter, perhaps?), in much the same way that fat is used to preserve paté, for example.

This is believed to be the first study of Iron Age potsherds and steatite vessels from mainland Scotland, and the results support previous studies from Iron Age sites in the Northern Isles and southern England. The evidence suggests that dairying was an important part of subsistence strategies at these sites, but as part of a mixed meat/milk economy.

Interestingly, there is no evidence of pig processing in the vessels from Clachtoll Broch, despite the presence of pig bones in the faunal assemblage. This too correlates well with studies from other Iron Age sites, and suggests that pigs may have been processed in other ways – perhaps being roasted in whole joints over the fire rather than being cooked within ceramic or other vessels. Pigs seem to have formed a much smaller part of the Iron Age economy than sheep or cows.

Many thanks to Dr Julie Dunne at the University of Bristol for analysis of the Clachtoll samples.