Assynt’s community sculpture to honour the Clachtoll broch project is well on the way to completion after a dramatic event at Glencanisp on Friday night.  After dark, a furnace was set up in the pole barn by artist in residence Julia Cowie, who, with her assistant Uist, demonstrated Iron Age metal production with sparks flying! 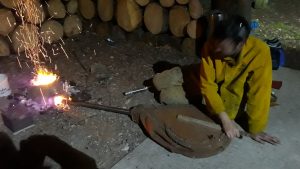 Uist pumping the bellows to keep the furnace burning.

Copper was smelted and alloyed with tin, and the resulting molten bronze was poured into molds to form casts of designs created by local people. Everyone present was invited to help with pumping the huge leather bellows to keep the fire blazing, and despite our best efforts, no, we didn’t burn the pole barn down!

Julia’s furnace was built with local sand and fired with locally-made charcoal and the designs have been carved into local beeswax by a range of local children, adults and dig volunteers, so there is now real understanding of how metal objects could have been made by people here back in the Iron Age.

The bronze-casting event on Friday was part of the twentieth birthday celebrations for Historic Assynt. As well as metal work, there was a chance to  enjoy some Iron Age food in the form of barley and oat bannocks and soup, followed by a talk by Historic Assynt chairman, Gordon Sleight, entitled ‘Discoveries and Puzzles in Assynt’s Past’, rounding up some of the highlights of the group’s work over the decades. 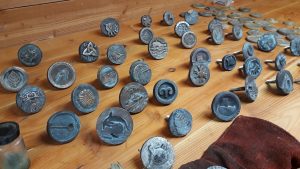 The bronzes will be installed by Julia in bedrock close to Clachtoll Broch.

The birthday events kicked off on Wednesday 14 November in Stoer Village Hall with a slide show and update about the broch project by Graeme Cavers of AOC Archaeology. He emphasised the uniqueness and importance of the assemblage of objects found in the broch, and explained, amongst other things, that the analysis so far is showing that the broch floor was extremely mucky! The floor layers will allow a really rich picture to be established of life inside the broch and its surrounding environment.

We also enjoyed a talk by archaeologist John Barber about the connections between Assynt’s Neolithic chambered cairns and mounds found from a similar period in Denmark, which have been revealed through research he has undertaken since the 2011 excavation of Loch Borralan East Chambered Cairn, part of the biggest cluster of Neolithic chambered cairns on the British mainland.

These events drew the project to a close for the year, at least in Assynt, although of course analysis of the finds is ongoing by AOC Archaeology.

There will be more events in 2019, including a history books event in March and some more experimental archaeology. The plan is to reconstruct copies of some parts of the broch, including wall, floor and household objects such as mats, fabrics and pots. It will then be burned down to learn more about some of the implications of the broch’s destruction in its catastrophic fire and collapse. Everyone will be welcome to take part in what is sure to be the biggest fire yet!